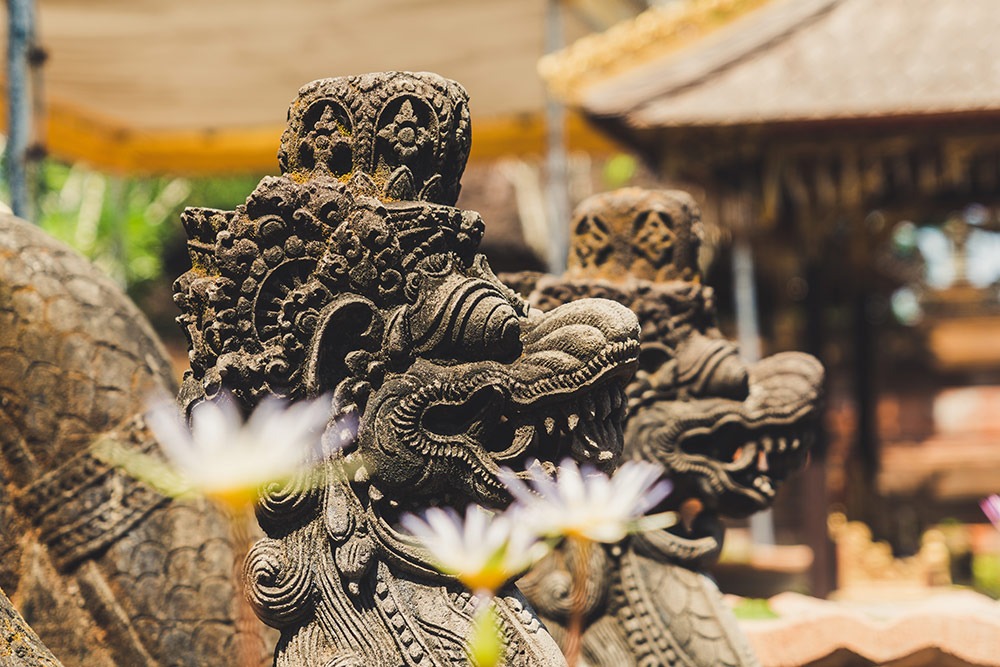 The main religion in Balinese culture is Hinduism, but it is quite different from the Indian Hindu religion. In Bali, the religion is closer to what we can call “animism”: the belief in the souls of all things in nature. That is why in Balinese culture, people are very careful and respectful of nature, because everything has a deity that lives in them. The Balinese culture and religion are also very festive: ceremonies, village festivals, pilgrimage, dances, purification rites and also cremation to honour the dead. The festive calendar in Bali is very rich of religious events of all sorts, to honour very different gods and rituals. 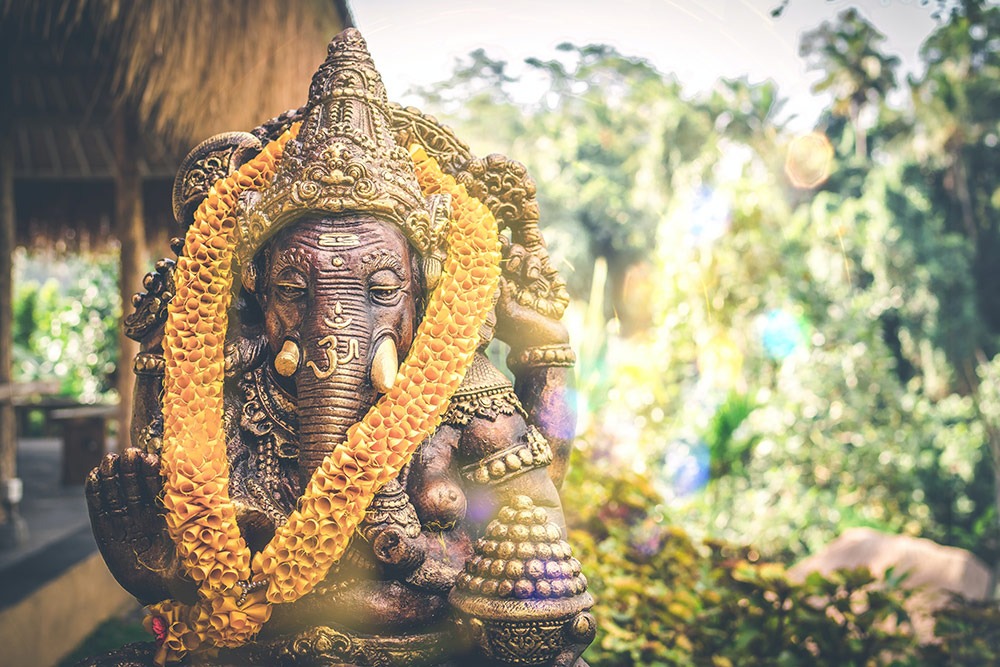 Bali is called the “Island of Gods”, and we can easily understand why. There are plenty of different gods in Balinese culture and religion, the three major ones being Brahma, Shiva and Vishnu. Dewa Brahma is the God of all Knowledge, often painted in red in temples in Bali. Dewa Vishnu is the merciful Protector of Life. He opens the cycle of life with his wife the Goddess of Fertility. At the other end of the cycle of life stands Dewa Shiva, God of Death and Destruction. This is not to take exclusively on a negative – Western – point of view. Indeed, in Balinese culture, destruction also means cleaning and coming back to its state of origin. This closing of circle is very important in the religion where karma could be depicted as a wheel that turns and balances according to good or bad deeds.

In Balinese culture, you will also find other popular gods, such as the famous Garuda the eagle – who gave his name to the Indonesian airline company. Bali tourists will recognize him easily with his pointed beak with teeth, large and magnificent wings, and often mounted by Dewa Vishnu. Another face that will soon is be familiar to all Bali tourists in any temple is Bhoma. This God guards the entrance of all the temples in Bali, or even private houses’ front door. Difficult to say if this large face with wide-opened mouth is smiling at Bali tourists or staring at them with a monstruous look. It probably depends on the – hopefully – benevolent intentions that they bear while entering a temple in Bali. 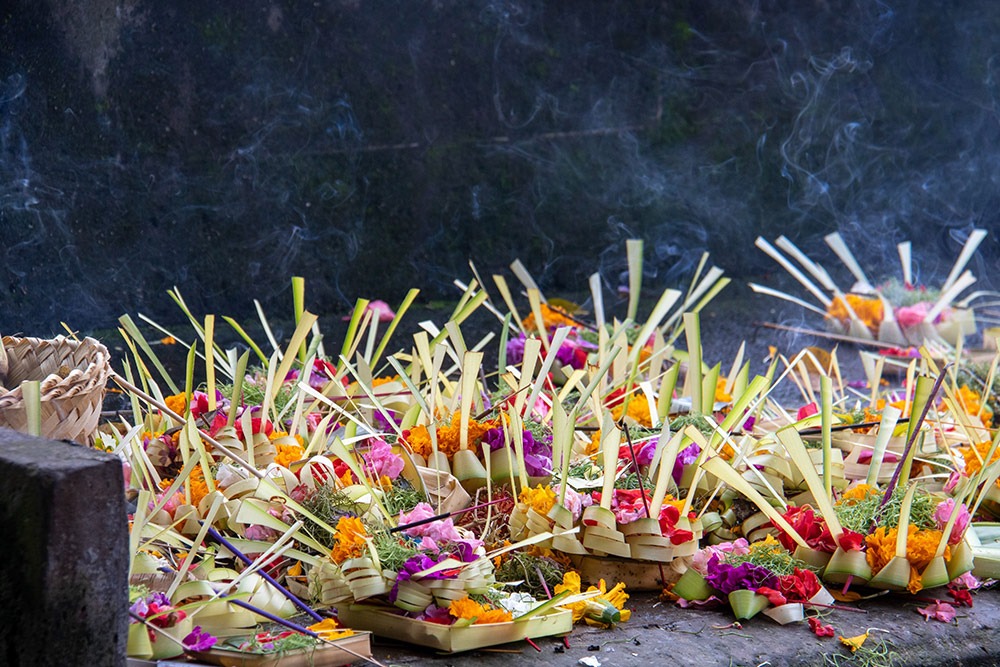 One major way to honour the gods in Balinese culture is to give them offerings. That is why you will find an incredible number of temples in Bali, of all sorts and all sizes. A temple in Bali is not necessarily a large place that can host public, it can also be similar to a small shrine in a private house or garden. The temple in Bali is there to protect its people and to protect the place. Even in a hotel, it is important to please and honour the gods so that guests can enjoy their stay without worrying. So even at places like the Kupu Barong in Ubud, Bali tourists may notice some temples and shrines.

People put offerings in front of a temple in Bali to nourish the gods. An offering is a small palm-leaf basket that serves as a tray – named “Canang sari”, to contain colourful items: fruits, flowers, leaves, nuts. In Balinese culture, each element has of course a symbolic meaning. Bali tourists will find these offerings in many places, either in the streets on the pavement, at the bottom of a small shrine, and of course in every temple in Bali. Read our article to discover our Top 10 temples in Bali.

Balinese culture: the 6 most important ceremonies

As mentioned above, Balinese culture is very rich and the festive calendar is marked with a multitude of ceremonies. Some of them are local-based, attached to a specific temple or to a private family event – such as a wedding, the “tooth-filing” ceremony or a cremation. However, some ceremonies are observed at island-wide level.

In Balinese culture, Nyepi Day is the “Day of Silence” celebrated in March every year. This day is the equivalent of New Year’s Day for the Balinese lunar calendar and is also a public holiday in Indonesia. During the whole day, all activities and businesses are stopped, lights are off, and by law nobody has the right to go out in the streets. That’s the day of soul purification. The day before, large offerings are placed at every street crossing, and giant papier-mâché “ogoh-ogoh” – demons in Balinese culture – will parade throughout the villages in music and are burnt in the evening to purify Balinese people.

Twice a year, Balinese culture celebrates a ten-day religious holiday called Galungan. Galungan is the celebration of the creation of the universe, the victory of Good against Evil. In Balinese culture, the spirits of the ancestors will come back to Earth in the temples and their former homes, so that Balinese people make all efforts to welcome them in the best way, through prayers and with offerings. Bali tourists will be able to recognize this festival namely by the tall and decorated bamboo sticks flanked on both sides of the streets which constitutes magnificent offerings. The last day is Kuningan, when the ancestors leave Earth, until the next Galungan.

Pagerwesi is the day in Balinese culture when people take time for themselves, to strengthen their defence against Evil spirits. It is a self-introspection and reinforcement day, also to pray for the rest of Humanity. The name “Pagerwesi” litterally means “iron fence”, as a symbol of a strong fortification of the mind against malevolent forces. This day is celebrated a few days after Saraswati.

Saraswati is the day dedicated to Dewi Saraswati, the Goddess of Knowledge. During this day, the Goddess will give a divine inspiration to Balinese people, and that knowledge and wisdom will enable them to celebrate Pagerwesi, to build a protective fence for the mind and soul.

Odalan is the celebration of a Bali temple anniversary. Balinese people will celebrate their temple with magnificent offerings to honour their deities as well as prayers and music. And with several thousands of temples in Bali, that is why Bali tourists have great chances to witness a temple celebration during their stay.

There are several “Tumpek” festivals during the year in Balinese culture. Each of them will honour specific deities by offering them specific objects. “Tumpek Landep” is the day to celebrate the creator of all metal tools, such as iron, gold or bronze. This blessing is to thank the God for its gift to Humanity. “Tumpek Uduh” – the “Green Festival” – celebrates Sanghyang Sangakkara the God of Plants and Food. Again, Balinese people will show their gratitude and make offerings made of trees, plants, coconut etc to thank the God for good harvests. “Tumpek Kandang” will honour the God of Animals and Pets, Sang Hyang Rare-Angon. During that day, household and farm pets – ducks, pigs, hens, dogs – may be decorated to worship their benefactor.